It takes a village

Students, staff and residents come together in new facility to promote geriatric research and the practical needs of older adults

The Centre of Excellence for Innovation in Aging is a new facility that puts researchers from the Schlegel-UW Research Institute for Aging (RIA) in direct contact with their population of interest. The centre, located on the University of Waterloo campus, is unique in its design as a long-term care home and a research centre. It supports a new “Village” as well as 15 other Schlegel Villages which combined provide long-term care, a retirement living, and apartments for seniors of varying degrees of independence.

Back in August 2015, when the Centre of Excellence first opened its doors, PhD candidate Robert Amelard was among the first to make use of the centre’s research wing. An engineering student at the University of Waterloo, Amelard’s thesis project involves using camera technology to monitor blood flow throughout the body. It’s known as Coded Hemodynamic Imaging (CHI).

“The idea is to leverage existing image processing techniques,” Amelard says. “For example, a lot of cameras these days, they figure out where the faces are in the picture.” Much like a camera focusing on a face, the specially designed CHI camera system uses a highly compact pulsed lighting and detection apparatus to focus in on light fluctuations at pulse points on the body, recording a real-time image of blood flow without ever making contact with the subject. 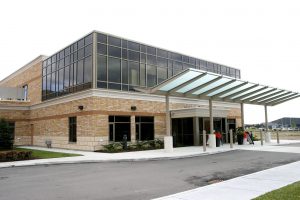 Amelard set up the CHI system at the Centre of Excellence for four weeks to record participants from the community. Using the camera to observe changes in their blood flow patterns, Amelard was able to make see how heart rate and brain blood flow is affected by the different activities one engages in on a day-to-day basis.

“The idea is that you could potentially mount this camera and monitor multiple people at once even, and be able to assess their cardiovascular function,” says Dr. Richard Hughson, whose lab has been hosting Amelard’s project. Hughson is the Schlegel Research Chair in Brain Health & Vascular Aging and the focus of his research is looking at the links between aging and changes in brain blood flow.

Amelard is one of many researchers Hughson has been collaborating with. He is looking forward to a partnership with biomedical engineers from the University of Waterloo who will be working with him to develop non-invasive monitoring devices that can be worn unobtrusively by research participants, allowing them freedom of movement.

The engineers have all sorts of ideas for new sensors, Hughson says, sensors that could be worn by participants to monitor things like oxygen levels in the blood and blood pressure. “Right now our ambulatory blood pressure device has a fairly large battery to it, but they’re working on a device that will really not be noticed by the wearer,” he says. Their inspirations are consumer devices like the Fitbit and other wearable tech.

“You have the potential for monitoring health, or health indicators, in people as they go about their normal activities of daily living,” Hughson says.

“Usually what you do is you bring people into the lab and you get them to lie down, stand up, and you slap a thousand and one different sensors on them,” Amelard says. “But there’s been a school of thought that pushing more toward a natural environment might be a better way to go.”

It’s a driving philosophy at the Centre of Excellence. Not many labs put such emphasis on doing ambulatory and non-invasive testing, Hughson says. His lab, which is equipped with ultrasound systems, tilt beds for testing how participants’ cardiovascular systems handle weightlessness, and transcranial Dopplers that measure the velocity of blood flow through the brain, adjoins a research apartment.

The fully functional apartment is complete with a bedroom, bathroom, kitchen and living area. It was designed to resemble a typical one-bedroom apartment in Ontario in order to accommodate study participants. It allows researchers to monitor them in a naturalistic setting as they go about their daily routine.

The next phase of Amelard’s project will see participants from the adjoining long-term care facility coming to live in those apartments where they can be observed and monitored for changes in their health using the non-invasive CHI system.

“It basically just gives the data from a realistic setting that we can literally walk right over to the lab and start analyzing right away,” Amelard says. 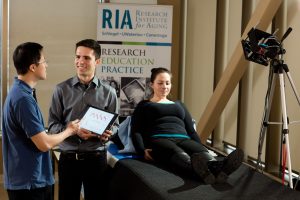 The RIA has worked side-by-side with those who care for the aging population since the mid-1990s. Founder Ron Schlegel was a faculty member at the University of Waterloo before he left to pursue a career in senior care. He founded a series of 15 retirement and long-term care facilities that bear his name: the Schlegel Villages. The Centre of Excellence makes 16.

Schlegel and current RIA President Mike Sharratt established the Research Institute of Aging at the University of Waterloo in 2005, and a year later applied to become a non-profit charitable foundation.

The Centre of Excellence itself is  mere months old, but the seed of it has long been part of Schlegel’s vision “to have research, education and practice all happening on-site in the same location so that the research is more relevant,” says Vice President of RIA, Josie d’Avernas.

As the new home of the RIA, the Centre of Excellence has three floors, with the upper floor dedicated to research laboratories, and the other two housing living classrooms, a pharmacy and primary care health centre, and the Ideas Café. On the upper floor, each of the eight Schlegel research chairs has an office and presides over their own lab.

Along with meeting rooms and work spaces, the research centre has a room called the Networking Hub which is equipped with video conferencing technology “so that we can connect this hub to all the other [Schlegel] Villages for secure data transmission and resident assessment,” d’Avernas says.

Construction on the retirement home portion of the Centre of Excellence will begin sometime in 2017, she says, but the long-term care facility and research portion of the building is fully operational. The centre currently houses 192 residents, about 200 staff and another 100 students.

“We want to influence the research agenda,” d’Avernas says. “We’d love to see researchers connect more closely with residents, not just when they have a research idea already developed, but in the process of developing what should be researched.”

Amelard adds, “Having the beautifully designed space custom-tailored to incorporate all those different types of equipment makes the research less daunting and you can now focus a lot more on the design of the study rather than ‘how do we set this thing up in the first place.’”

The PhD student describes the upper floor of the research institute as a place rich with a strong collaborative spirit. Research chairs don’t just shut themselves up in their own labs, they share ideas and the benefit of their interdisciplinary experiences with each other and with students.

“Everybody is there because they care about the work they do and because they are top-tier researchers in their fields,” Amelard says. “I am a very firm believer that my research would not be at the point it is without the help and support and mentorship with everybody at the RIA.”