The rarest jewel in the Arctic

Imagine that you are an Arctic researcher and you’re about to go as far north as it is possible for a civilian to go in Canada. It is so far north that, depending on the time of year, there are 24-hour days and 24-hour nights. The weather fluctuates dramatically, with temperatures exceeding -40 C in the winter, and any exposed skin is soon susceptible to frostbite. You have boarded a charter plane to a weather station called Eureka, in the province of Nunavut, and from there you continue another 15 kilometres north on Ellesmere Island. Here ends your journey; you have arrived at the Polar Environment Atmospheric Research Laboratory (PEARL), a facility that is part of the Canadian Network for the Detection of Atmospheric Change (CANDAC).

PEARL, as Canada’s closest university-based year-round research facility to the North Pole, is a hub for atmospheric research in the Arctic, both for Canadian researchers and international scientists. The PEARL Ridge Laboratory was first built in 1992 on a site chosen by Environment Canada, to study the stratospheric ozone. The facility was developed during the early years of the Montreal Protocol, a global agreement to protect the stratospheric ozone layer by phasing out the production and consumption of ozone depleting substances. PEARL was also meant to serve as a convenient location from which to study the polar vortex, a large area of low pressure and cold air surrounding both the North and South Poles. Researchers wanted to better understand why the polar vortex expands, sending cold air southward into areas that are not typically cold. Since PEARL’s inception, its mandate has expanded to include three main areas: air quality, ozone levels and climate change.

A lot of work at PEARL can be done remotely, says James Drummond, Professor of Physics and Atmosphere Science at Dalhousie University, Research Chair in Remote Sounding of Atmosphere, and principal investigator at CANDAC. “We use an internet connection so that we can still run instruments from almost anywhere,” Drummond says. A rotation of operators, to oversee equipment and in case of emergency, is the only permanent presence at PEARL. In addition, large groups of researchers will travel to PEARL for what are referred to as “major campaigns”, which can range from two weeks to a month.

“The Polar Sunrise campaign will begin February 24, 2018, and another campaign is taking place in the summer of 2018,” says Pierre Fogal, Site Manager at PEARL and a Senior Research Associate at University of Toronto Department of Physics. The lengths of the trips are based on the idea that no person or group of people should be left separated or in isolation at the facility too long. “When we go up there, we go up there with an intensive schedule in mind,” Fogal says.  “The campaigns are often quite draining on the researchers. Working, often in extreme cold, six-and-a-half days a week, you can only do that and be effective so long.”

During the time that they spend at the PEARL facility, the researchers follow a tightly packed schedule. “We’ll meet at breakfast to discuss the plans for the day,” Fogal says. “From there we’ll split up and go off to different sites, because we have three locations to monitor.” The crew of researchers will prepare readings from the different equipment they have set up and monitor for the entire day. “As soon as the sun rises, the work begins and the work continues till sundown,” Fogal says. Little time is wasted due to the limited amount of time the researchers are at the facility. 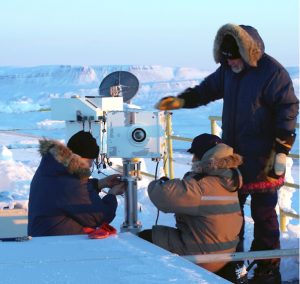 Fifteen kilometres from the main station near the PEARL facility is the Safe Hut, which can function independently from the main building in emergency situations, which might require evacuation of the main laboratory.  Its main purpose is to protect the researchers while making it possible for them to survive until help arrives. “The facility has everything to properly house the researchers,” Fogal says.  The building is checked every time researchers arrive at PEARL on a campaign as a precautionary measure, but “the Safe Hut has never been used,” Drummond says. “We’ve never had to use it and we like it that way.”

“It sucks in the air from the outside and then breaks particles apart into smaller bits,” Fogal says. “It accelerates those into a quadruple mass spectrometer and then detects their composition.” Contrary to popular belief that the air quality in the Arctic is pristine due to its isolated location, the reality is that the region is as affected by pollution as anywhere else. “A lot of it is due to industrial activity in northern Europe and Russia, or even from forest fires,” Drummond says.

PEARL’s Fourier-transform infrared spectrometer helps to measure infrared radiation emitted by the sun. “In particular we measure which parts of the sunlight are absorbed by the atmosphere,” Fogal says.  “With the use of spectrometers we measure the amount of concentration of chemicals such as ozone, carbon dioxide, and other gases that are found in the atmosphere.”

PEARL’s funding comes from a variety of sources, but the majority of it is from the federal government via the Natural Sciences and Engineering Research Council. “We had a lot of in-kind support from Environment and Climate Change Canada,” Drummond says. “We also get funding from the Canadian Space Agency, because we do a lot of work associated with satellites.” The expenses associated with conducting research in the Arctic, such as fuel costs and charter planes, are always increasing, Drummond says. Funding levels for PEARL are adequate for now, though he says they could certainly do with more. “We’re not anywhere near the potential of the facility.” An increase in funding would help with new and existing projects that PEARL is undertaking in 2018. “We have a drone that we would like to see whether we can use for some particular measurements,” Drummond says. “Running a drone in those conditions is challenging.”

One of PEARL’s many contributions is its hand in training young researches and scientists. Scientists and researchers come from all over the world to study and learn at the facility. “Our students go on [to work] in the government, academia, industry and it’s [because of] the kind of training they got here at PEARL,” Drummond says.

With climate change becoming an ever more pressing issue, facilities like PEARL contribute to valuable, in-depth research on the subject. “At international conferences, everyone wants to know how the lab is doing because the data from the lab is used worldwide,” Drummond says. “If we ever lose that facility, it will be very hard to get anything like that back. PEARL is truly  unique.”

The power of plants to ‘grow’ low-cost, high value drugs

By Jana Manolakos While medicines have been extracted from plants for centuries, plants and plant …