Innovative Canadian research may find a cure, but is big pharma buying?

The treatment of diabetes, be it Type 1 or Type 2, is often characterized by a constant monitoring of blood glucose levels and insulin injections. In some severe cases, pancreatic islet cell transplantation can lead to long-term insulin independence, but it also requires the recipient to take immunosuppressants for the rest of their life.

Diabetes: A disease in which the body’s ability to produce or respond to the hormone insulin is impaired, resulting in abnormal metabolism of carbohydrates and elevated levels of glucose in the blood.

An estimated one in 10 deaths of Canadian adults is diabetes-related, according to Diabetes in Canada, a 2011 report from the Public Health Agency of Canada. The condition comes with a host of complications, including cardiovascular disease, chronic kidney disease and non-traumatic lower limb amputation due to diabetic neuropathy and peripheral vascular disease. There is no cure.

The news, however, is not all dire. Promising treatments and biotechnological innovations have emerged in recent years that hold out hope of a more lasting solution for those suffering with the condition. And of course, there is the search for the ultimate cure, a search that organizations like JDRF Canada (formerly known as the Juvenile Diabetes Research Foundation) are dedicated to funding.

The search for a cure

A cure for Type 1 diabetes would require two things, says Dr. Robert Goldstein, Senior Advisor to JDRF Canadian Clinical Trial Network (CCTN). “You have to stop the pathologic autoimmune response and you have to replace or restore insulin-secreting cells.”

Type 1 diabetes involves a faulty immune response where the insulin-secreting beta cells in the pancreas are attacked and destroyed. Science has figured out how to suppress the immune response, but only by suppressing the whole system. Once the autoimmune attack is halted, the race is on to protect the remaining beta cells and even stimulate the growth of new beta cells to replace those lost.

“The research is very exciting in Type 1 diabetes because we have successful samples of all of these things in animal studies and now the race is on to transfer and translate those into human studies,” Goldstein says. “The problem is… the results in the best animal models don’t always translate and the proof of concept trials often fail. Studying 30 humans is much more expensive than studying 30 mice and you can only do so many studies.”

Along with the expense, there is the difficulty of establishing the safety of treatments targeted to young diabetes sufferers. Most studies recruit participants over 18 years of age, but most people with Type 1 diabetes are diagnosed in childhood or early adolescence, long before the age of 18.

This may explain why the pharmaceutical industry has been hesitant to wade into diabetes drug development, despite the large potential market.

“There’s probably less funding across the board in the area of taking the basic research findings to the clinic,” says Goldstein. “In the earliest stages it’s a high-risk gamble and drug companies these days are, shall we say, risk-averse. They’ll invest in something that has better data early and cheaper, and a foundation like the [JDRF] helps to fill that gap by funding some of the more innovative high-risk research at that point in the translation process [from animal studies to human clinical trials].”

Researchers at the Institut de recherches cliniques de Montréal (IRCM) are looking to improve the way Type 1 diabetics monitor their blood sugar. Dr. Rémi Rabasa-Lhoret, Director of the Metabolic Diseases research unit at IRCM, and his colleagues are testing a fully automated external continuous glucose monitoring device that also administers insulin to the wearer as needed, also known as an artificial pancreas.

“We take advantage of existing [insulin] pumps and existing continuous glucose monitoring systems, and we take control of the pump,” Rabasa-Lhoret says. He describes the device like a home climate control system that monitors the temperature in the house and then heats or cools it depending on programmed specifications. The system analyzes the wearer’s glucose profile and takes control of the insulin pump to maintain a target glucose value.

Other teams around the world have more advanced versions of the artificial pancreas platform, Rabasa-Lhoret says, but the IRCM platform is unique in that it combines both insulin and glucagon. “Glucagon is doing roughly the opposite of what insulin is doing,” Rabasa-Lhoret says. “While insulin is bringing glucose down, [glucagon] is bringing glucose up.” He compares the insulin-only artificial pancreas to driving a car with only an accelerator. Adding glucagon into the mix to counteract hypoglycemia is like adding brakes.

“The glucagon seems to be more interesting, but it’s also more expensive, it makes the system more complex, and we could raise some safety issues unknown until now because no one has been exposed to repeated doses of glucagon long-term,” Rabasa-Lhoret says. “Cost, complexity, and potential safety need to be weighed against the probable benefits.” 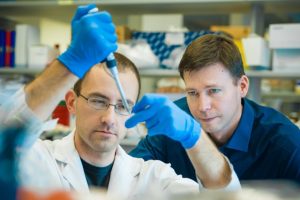 Another area of diabetes research that has seen progress is the use of stem cells to encourage the growth of insulin-secreting beta cells. The lack of beta cells in the pancreas is a problem for both Type 1 and late-stage Type 2 diabetes patients. When insulin injections are not sufficient to control glucose levels, islet cell transplantation can be an effective alternative. However, the islet cells are obtained from deceased donors and are therefore in short supply.

With the stem cell approach, the problem of a limited supply of beta cells is eliminated, says Dr. Timothy Kieffer, leader of the University of British Columbia’s Diabetes Research Group. “We could make enough in one lab to treat everybody in the world,” he says.

Kieffer and his colleagues are part of a global effort to find the best way to convert differentiated stem cells into pancreatic beta cells and then protect them once they are introduced into the body of a diabetic. To get around the body’s destructive immune response, he and his fellow researchers are working on a way to transplant encapsulated differentiated stem cells just under the skin.

The encapsulation device would act like a teabag, Kieffer says. “The membranes will allow the nutrients to get inside where the [beta] cells are, and the glucose to get in, and the hormone insulin from the cells to get out through the membrane, but the immune cells that may want to destroy the cells within don’t have access.”

Whether or not this will be a one-time procedure and long-term solution has yet to be determined in clinical trials.

Meanwhile, at the Ottawa Hospital Research Institute, Dr. Michael Rudnicki and his graduate students have been doing some interesting animal studies in the area of regenerative medicine. They have identified a protein called periostin that seems to be an important factor in pancreatic regeneration.

“We asked whether, if we injected periostin protein into a pancreas, we could stimulate a regenerative response, and indeed that’s what we found,” Rudnicki says.

During a long-term safety study the research team gave repetitive doses of periostin to knock out mice that lacked the protein. After six weeks of injecting periostin into the gut cavities of the mice and then aging the mice for six months, the researchers observed that the mice were leaner, had improved gluco-regulatory features and more pancreatic islets.

Rudnicki would also like to explore whether periostin would be helpful in the stem cell work Kieffer and his research group are doing, by augmenting the differentiation protocol. “Periostin would be a protein that enhances these process; it might increase the efficacy of these existing therapies,” he says. 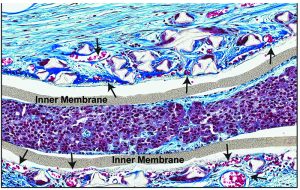 In a field that is racing to find a way to stop diabetes’ destructive autoimmune response and replace insulin-producing beta cells, Calgary-based biotech company Resverlogix is more concerned with the long-term complications that come with the condition.

“The problem with the industry right now is that they’re very glucose-centric… and quite frankly they’ve kind of plateaued on successes,” says Don McCaffrey, President and CEO of Resverlogix. The biotech has carved a niche for itself by focusing instead on reducing major adverse cardiac events, or MACE, in diabetic patients. Resverlogix’s drug, Apebetalone, which is currently in a phase three clinical trial, is being tested as a treatment for the reduction of MACE events in patients with Type 2 diabetes, with the secondary effect of reducing MACE events in patients with chronic kidney disease. Previous trials have shown a relative risk reduction of MACE by as much as 77 per cent.

For the FDA, it seems to be more important for diabetes drugs to reduce glucose than MACE events like death, heart attacks and strokes, McCaffrey says. “The FDA updated guidance from around 2008 shows that if you can show a glucose reduction of just a few per cent, but you don’t increase MACE by more than 30 per cent, that is a registerable drug,” he says. However, reducing MACE is a priority for Resverlogix and although they could go after a glucose reduction target as well, they chose not to.

The most important target for a drug company is not so much FDA or Health Canada approval, it is securing the approval of payer groups, McCaffrey says. That means having the support of government bodies in Canada, and insurance companies and health care groups in the U.S.

“If a drug is approved by the FDA and payer groups just don’t believe in it, or it costs too much, the payer group is not going to do anything,” McCaffrey says. “It doesn’t matter what the FDA said.”

In high school, Harry Gandhi worked at a diabetes clinic. “Monitoring [the condition] continuously was such a big factor,” he says. “It’s basically the next best thing to preventing the disease.”

As a student in the University of Waterloo’s Biotechnology and Economics program, Gandhi and a group of his friends started working on a contact lens that would act as a continuous glucose monitoring sensor. The project became the basis of Medella Health, a biotech company Gandhi co-founded.

Medella Health’s glucose monitor analyzes tear film, the liquid layer on the eye that bathes the cornea, in much the same way glucose levels are monitored in the blood. In fact, Gandhi says, tear film is essentially like a diluted version of the blood “minus all the crap.”

The idea is that, instead of pricking fingers several times a day or wearing an interstitial glucose measuring devices connected to sensors placed just below the surface of the skin, a diabetic could pop in a contact lens in order to monitor blood sugar continuously throughout the day. The contact lens would connect via Bluetooth-like technology to a device worn close to the face, perhaps on a necklace or a clip, which would in turn connect to an app on their mobile phone that would analyze the data generated.

“If your glucose is jumping too high and we’re noticing that trend, or if it’s dropping too low and we think you’re going into hypoglycaemic [shock], it will create an early warning system,” Gandhi says.

Glucose levels will not be the only health indicator the contact lens will be able to monitor.

“In the future, we’re going to be able to monitor things like proteins, hormones, or small molecules that are indicative of your health,” Gandhi says. “We see diabetes just as a starting point, but really we want this to be a complete preventative data gathering system.”

Last fall, the sun spewed a violent mass of fast-moving plasma into space that came …